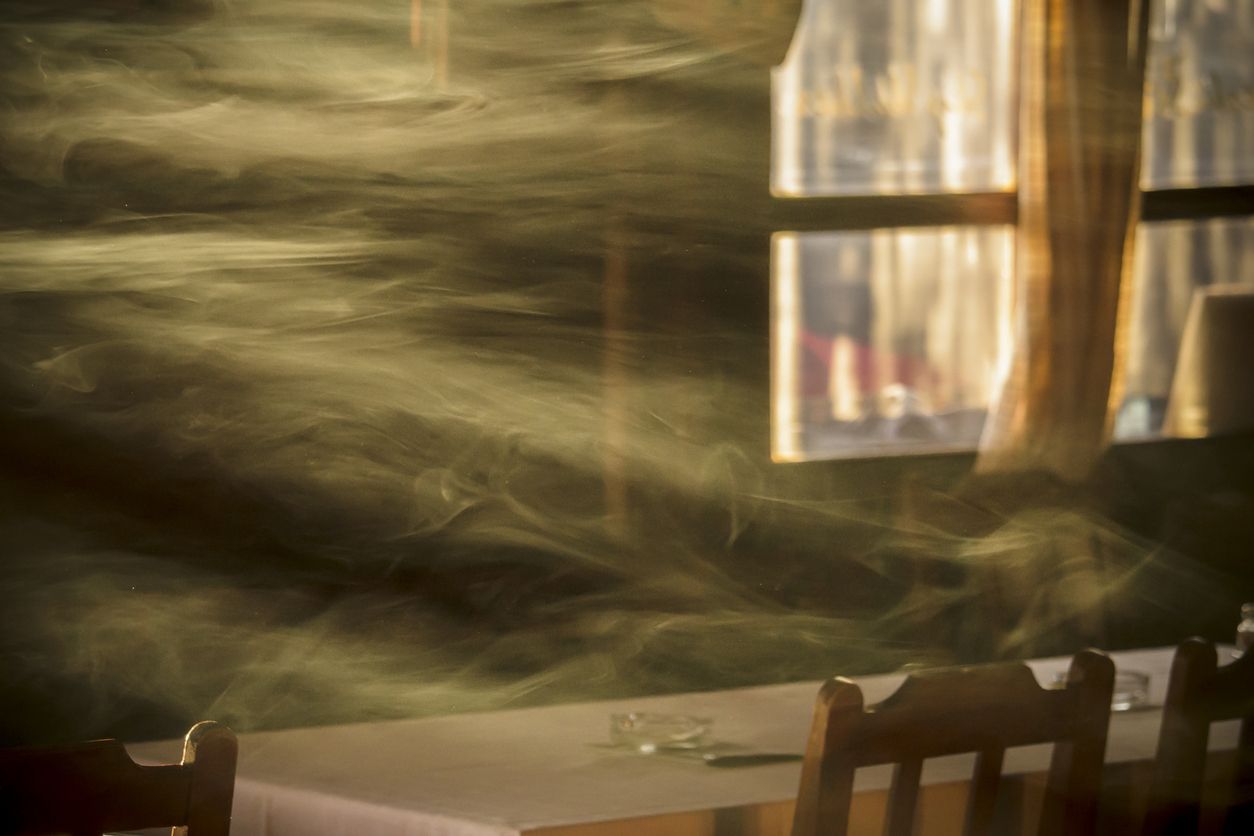 Policies restricting secondhand smoke do nothing to protect the public from a lesser known but more widespread health hazard: thirdhand smoke.

Thirdhand smoke is the residue you smell when you ride in a smoker’s car or chat with a coworker who’s just back from a smoke break. Problem is, the residue can linger for months—even years—after the odor dissipates, clinging to walls, curtains, furniture, bedding, carpeting, clothing, and skin.

This residue does not sit idle. Particles coating surfaces can attach to common airborne pollutants, generating a noxious brew of compounds call nitrosamines. These compounds are, in turn, released into the air and circulated via a building’s air conditioning system. We can inhale them or swallow them, or they can penetrate our skin.

“Just because you’re in a nonsmoking environment doesn’t mean you aren’t exposed to tobacco,” cautions Drexel University chemist Peter DeCarlo. “That Uber car you jump into, the hotel room you stay in, even a classroom where smoking hasn’t been allowed for decades: These are places where you are often exposed to a lot more than you expect.”

DeCarlo is the lead author of a new study, published in Science Advances, that found thirdhand smoke travels farther than previously known. “Potentially toxic chemicals associated with thirdhand smoke are found in places we wouldn’t have expected,” DeCarlo said.

For example: a university classroom where no one had smoked in over 20 years. DeCarlo’s team studied the air composition in such a classroom, finding that chemicals from thirdhand smoke made up 29% of the air mass in the room.

How did that happen?

The classroom was located near an office space occupied by smokers—a space that shares the classroom’s HVAC system—and down the hall from a balcony known to be a smoking spot. The researchers concluded thirdhand smoke compounds would waft into the classroom, stick to surfaces, and then hitch a ride on tiny airborne particles.

“A room located near a smoking area with smoke penetration or a room occupied by a smoker can effectively expose the other occupants served by the same HVAC system to thirdhand smoke, even if they do not share space directly,” the Drexel researchers wrote.

Other research has detected heavy tobacco residue inside nonsmoking hotel rooms and casino areas—and in the urine of patrons who’d been there.

For instance, a study of 40 California hotels and nonsmoking guests found that in nonsmoking rooms, levels of airborne tobacco pollutants were nearly five times as high as they were in rooms of hotels that banned smoking everywhere on the premises. Some guests in nonsmoking rooms had indicators of nicotine exposure in their urine that were more than twice the levels of guests who stayed at smoke-free hotels.

The same research team, from San Diego State University, found thirdhand smoke residue on the walls and carpet of a casino that had banned smoking three months earlier.

“Smokers leave a legacy behind that they cannot control,” said Georg E. Matt, a tobacco researcher involved in both studies. “The physical reservoirs—in the fabrics, the blankets, the upholstery, the drywall—are very deep, and you can’t just take them out.”

The Health Hazards of Thirdhand Smoke

Thirdhand smoke is pervasive and enduring, but is it actually harmful?

The American Academy of Pediatrics calls it “a danger to children” and has issued recommendations to limit children’s exposure to thirdhand smoke.

The Harvard Medical School doctor who coined the term in 2006 notes that young children are especially vulnerable because they breathe faster than adults, have thinner skin, spend more time on the floor, and aren’t particularly discriminating about what they put in their mouths.

But adults are hardly immune. “There are carcinogens in third-hand smoke, and they are a cancer risk for anybody of any age who comes into contact with them,” asserts Philip Landrigan, M.D., of Mount Sinai School of Medicine in New York.

Another researcher calls smoke-generated nitrosamines “among the most potent carcinogens there are.”

At this point, scientists can’t quantify the danger to humans—the field is too new. But animal research suggests the health hazards are numerous and profound.

For example, mice exposed to thirdhand smoke have an elevated risk of lung cancer, compromised growth and immunity, abnormal behavior, and damage to multiple organs, according to studies conducted at Lawrence Berkeley National Laboratory. Another California research team found mice exposed to thirdhand smoke via carpet segments had an elevated risk of liver damage and diabetes. Cell damage in their livers and brains was evident after just two months of exposure to thirdhand smoke; at four months, the fasting blood-glucose and insulin levels of these mice had risen 30 percent.

Tobacco residue on a hotel couch may seem like a small threat—especially compared to the toxins swirling in a smoke-filled casino. But what alarms researchers isn’t the onslaught of contaminated particles; it’s their staying power.

“With thirdhand smoke, there is a constant source of exposure, day after day after day,” says Neal Benowitz, M.D., a professor of medicine at the University of California.

How to Reduce Thirdhand Smoke

A decade ago “thirdhand smoke” was an obscure term used in scientific journals; now it’s becoming part of the vernacular. As the public gains awareness of the hazards, they no doubt will react as they have to secondhand smoke: with alarm—and a desire to stay the heck away.

Of course, this puts hotels, schools, and businesses in a tough spot, because thirdhand smoke, unlike secondhand smoke, can’t be boxed in or banned. Toxic tobacco compounds that cling to a student’s backpack or a casino employee’s uniform can be launched airborne wherever that person or item goes.

Of course, wholesale replacement of structures, carpets, and furniture is not a realistic solution for any business.

So what can be done?

Prevent these carcinogens from landing on surfaces in the first place, by deploying Plasma Air’s ionization technology in HVAC system.

Installed in the air handling unit itself or on the main supply ductwork, the units generate millions of positively and negatively charged ions. These ions travel through the duct system and out into the air, neutralizing and eradicating harmful pathogens and carcinogenic chemicals, such as nitrosamines, hydrogen cyanide, carbon monoxide, and ammonia, just to name a few. Ionization technology can be installed in schools, hotels, casinos, even homes—anywhere that thirdhand smoke poses a threat, which, according to the latest research, is just about everywhere.

To learn more about how Plasma Air’s whole-building air purification technology works, visit our website or contact us today.