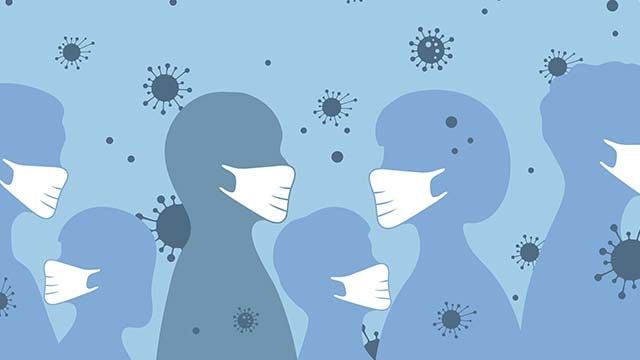 Is the New Coronavirus Airborne? (And What Does Airborne Mean, Anyway?

How exactly does the novel coronavirus spread?

Do infectious particles — once launched by a sneeze, a cough, or an exhalation — drop from the air within seconds, or can they remain suspended for minutes, even hours? How far and fast can they travel?

The answers, trickling out in preliminary studies, have huge implications for preventing transmission of SARS-CoV-2, the coronavirus causing the infectious disease COVID-19, especially among healthcare workers.

Indeed, the safeguards hospitals must deploy — the personal protective gear, the intubation and ventilation protocols, the air dis-infection technology — largely depend on how readily the pathogens waft about.

As researchers race to understand SARS-CoV-2 transmission, the terms airborne, aerosol, and droplet are bandied about in medical journals and media, generating confusion and much debate.

Scientists put forth competing definitions, and the distinctions among terms are more nuanced than once thought.

Given the high stakes, “it’s important to clarify such terminology,” an international research team asserted in BMC Infectious Diseases.

Let’s start with airborne, the most nebulous of the terms used to describe virus transmission.

Strictly speaking, airborne means “transported by air,” so to some scientists, respiratory particles of any size — even large, wet gobs that sink quickly — are classified as airborne, in contrast to viral pathogens carried by blood or semen.

Many scientists, however, use airborne synonymously with aerosol.

An aerosol is often defined as a viral particle smaller than 5 micrometres (0.0002 inches), though some scientists include particles up to 10 μm.

By either definition, infectious aerosols are trouble: They can linger for long periods, travel down corridors, and slip through gaps in surgical masks. When inhaled, aerosols can invade the respiratory system; the smallest can penetrate the furthest, burrowing into the tiny air sacs of the lungs.

Measles, chicken pox, tuberculosis — all are spread via aerosol. Measles aerosols are so potent that if you’re unvaccinated and unprotected by (at least) an N-95 mask, you can become infected merely by walking into a room that was, an hour or two earlier, occupied by an infected person.

Aerosols have long been defined in sharp contrast to droplets, heftier particles that succumb to gravity within a few feet and are less threatening to public health. A sneeze spray can be blocked by an inexpensive surgical mask and evaded entirely by a few footsteps backward.

Droplet-transmitted diseases can be spread by contact — droplets might land on bedrail that’s touched by a nurse who then touches her eye, nose or mouth. But rigorous handwashing and surface cleaning can control transmission in ways that aren’t possible with aerosol-transmitted diseases.

Just how big is a droplet? That’s like asking, “How big is a large pizza?”

Some scientists define droplet as larger than 20 μm; others draw the line at 10 μm. Still others use droplet as a catchall term for particles of all sizes and consider the distinctions simplistic.

How Heavy Droplets Can Stay Afloat

First off, a single disease can be spread in multiple ways. Influenza, for example, can be transmitted via aerosols, large droplets, and direct contact.

What’s more, a sneeze or cough can expel viral particles in a continuum of sizes, all clustered in what Dr. Bourouiba calls a “turbulent gas cloud.”

Particles within the cloud, she posits, travel further than particles traveling solo, because the cloud’s moist, warm atmosphere prevents the droplets from quickly evaporating.

“Under these conditions,” she says, “the lifetime of a viral droplet could be considerably extended, by a factor of up to 1000, from a fraction of a second to minutes.” The droplet, her research suggests, might travel as far as 27 feet.

At this point, the droplet could sink and contaminate a surface. Or it could evaporate, leaving behind infectious residue that stays suspended for hours, venturing around a hospital at the whims its air-conditioning system.

The force of a sneeze or cough can give droplets an additional push. So can gusts from hospital activity.

“Suspension times will be far higher where there are significant cross-flows, . . . with doors opening, bed and equipment movement, and people walking back and forth,” the BMC Infectious Diseases authors note.

Even a surface landing may not represent the end of a droplet’s airborne life: Droplets can be kicked back up into the air when a healthcare worker removes a gown or exits the room, exposing the worker to infection yet again.

Compounding the risk to medical workers, infectious particles can be stirred up in the course of caring for ill patients. The very procedures used to save patient’ lives — intubation, ventilation, nebulizing, cardiopulmonary resuscitation — can cause doctors and nurses to become infected.

“Procedures that irritate the airway . . . can cause a patient to cough forcefully, potentially emitting virus-laden aerosols,” American researchers explain in Virus.

During the 2002-2003 SARS and 2012-2013 MERS crises, healthcare workers fell ill at alarming rates, due in part to aerosol-generating procedures.

Are the same procedures spreading COVID-19, too? Apparently so.

The World Health Organization (WHO) now recommends “airborne precautions” — including N-95 masks, which filter out 95% of aerosols — for circumstances in which “aerosol generating procedures and support treatment are performed.”

But how vulnerable are healthcare workers in other circumstances?

Are coronavirus aerosols hovering in patient rooms and common areas, primed to infect medical workers who might inhale them?

At the moment, WHO suspects they are not and recommends only droplet and contact precautions for the general care of COVID-19 patients.

But much of the world disagrees.

Based on emerging research, the U.S. Centers for Diseases Control and Prevention and the European Centre for Disease Prevention and Control, are recommending airborne precautions for any situation involving the care of COVID-19 patients.

No one is suggesting COVID-19 is spread like the measles; the infection rates would be far higher than they are. (A single measles patient can infect 12 to 18 vulnerable people; each COVID-19 patient infects 2 to 3 others.)

However, experts strongly suspect some form of aerosol transmission is occurring — that COVID-19 is not simply spread by people sneezing on each other and touching infected doorknobs.

One clue is the high rate of people who are infected but have no symptoms, perhaps 25% of all those infected.

“I think increasing evidence suggests the virus is spread not just through droplets but through aerosols,” says Gerardo Chowell, Ph.D., an American epidemiologist whose research found 18% of infected passengers aboard the Diamond Princess cruise ship remained symptom free.

At the University of Nebraska Medical Center, an American hospital where cruise-ship evacuees and other COVID-19 patients have been either quarantined or hospitalized, samples were collected in 11 rooms and in adjacent hallways.

Among the findings: 66.7% of the hallway samples tested positive for SARS-CoV-2 RNA.

Unsurprisingly, the researchers found coronavirus RNA on 76.5% of personal items, such as cell phones, iPads, and reading glasses. But SARS-CoV-2 residue also was found on ventilation grates, on the floor under the patients’ beds, and on ledges of windows that patients had not opened.

Airflow modelling showed the particles likely had floated there.

Did the air samples contain enough virus to transmit infection? That’s still under investigation. But based on the results so far, the team is assuming aerosol transmission occurs.

“Our team was already taking airborne precautions with the initial patients we cared for,” said James Lawler, M.D., co-author of the study and director of the medical center’s Global Center for Health Security. “This report reinforces our suspicions.”

A Chinese team was similarly persuaded after sampling the air in a make-shift Wuhan hospital, fashioned from an indoor sports stadium. High RNA concentrations were found in rooms healthcare workers used to remove protective clothing after treating COVID-19 patients.

The researchers suspect that virus-laden aerosols on the clothing were re-launched when the gear was taken off or that contaminated floor dust was propelled airborne by foot traffic.

Either way, the researchers concluded, “The virus aerosol is a potential transmission pathway.”

That critical question has yet to be answered. But laboratory research, conducted by the National Institute of Allergy and Infectious Diseases, suggests at least a half hour —and perhaps as long as three hours.

When the study was first reported, in a letter to the New England Journal of Medicine, the authors described aerosol transmission as “plausible.” Since then, study co-author Dylan Morris has revised his assessment considerably.

“When our stability paper came out, I said that we didn’t have clear evidence of principally aerosol-driven transmission in an everyday setting. We now do have such evidence.”

Morris was referring not to his laboratory research but to the tragic outcome of a choir rehearsal in the American northwest: Of the 56 singers who rehearsed in a large room, standing at a distance from one another, 45 became infected and two died.

Not only is aerosol transmission a threat for the general public, Morris maintains, but hospital settings “carry a particularly elevated risk.”

How Hospitals Can Fight COVID-19s

As evidence for aerosol transmission of SARS-CoV-2 mounts, so does the death toll of healthcare workers worldwide. In France and Spain, more than 30 healthcare professionals have died of COVID-19, and thousands of others have been forced to self-quarantine.

Hospitals must now operate on the assumption that aerosol transmission is happening.

First and foremost, this means providing healthcare workers on the front lines with appropriate protective gear — “even if they are farther than 6 feet away from a patient,” advises Lydia Bourouiba, Ph.D., of MIT.

She cautions that N-95 masks, already hard to come by, may not even suffice; it’s unknown whether they can block the “high-momentum multiphase turbulent gas cloud” that may be ejected when an infection patient sneezes or coughs.

In addition, hospitals should follow CDC guidelines for respiratory-assist procedures that are likely to induce coughing, performing them “cautiously” and avoiding them “if possible.” The CDC also recommends isolating COVID-19 patients in negative-pressure isolation rooms.

Of course, scrupulous hand hygiene and surface cleaning are critical, given the staying power of SARS-CoV-2 on surfaces.

Hospitals, however, are confronting an unfortunate reality: few of these precautions can reasonably be followed in the throes of a pandemic.

Dire gear shortages plague facilities worldwide, and hospitals are so overcrowded that patients in need of negative-pressure isolation rooms are instead being treated in sports arenas and tents.

Even in the best of circumstances, hospital hand hygiene and surface cleaning are inadequate, but when hospital staffs are collapsing from exhaustion, lapses will inevitably be greater.

Hospitals are doing the best they can with what they have to protect their workers from infection. But in these trying times, the recommended precautions must be augmented by medical-grade air dis-infection technology, such as ultra-low-energy portable units by Novaerus or Plasma Air’s HVAC bipolar ionization solutions.

The same technology is used in hospitals and nursing homes to prevent the aerosol spread of other highly contagious viruses, such as influenza, norovirus, and measles, as well as dangerous bacteria and fungi, such as MRSA, Clostridium difficile, and Aspergillus niger.

Novaerus units operate continually and are safe around the most vulnerable patients, including COVID-19 patients in respiratory distress. A number of hospitals worldwide, including in Wuhan, China, have installed Novaerus portable units to help reduce transmission of SARS-CoV-2 among healthcare workers and patients.

Plasma Air’s HVAC solutions use bipolar ionization technology to produce a natural bio-climate rich in positive and negative ions. The ions travel in the air stream and to the occupied spaces attaching to viruses robbing them of life-sustaining hydrogen.

Healthcare acquired infections already had reached worrisome levels before the new coronavirus was unleashed on the world. In the era of COVID-19, it’s become more urgent for hospitals to deploy every available safeguard against deadly aerosols.